A rather odd question was recently put to me on twitter.

I was asked who I hated most in the ecosystem of London tech investors. I know that you shouldn’t take much on twitter seriously, but part of this question spoke to a more commonly held misconception.

Many entrepreneurs believe that investors from different funds view each other as direct competitors, and that more funds in an ecosystem makes the job of existing investors harder.

In fact, the VC funding scene is a web of cooperation. Looking at just London investments from 2009–2014, there are interlinks between almost every major fund. The web below shows that rather than having favourites and rivals, in most cases venture funds are partners with everyone. 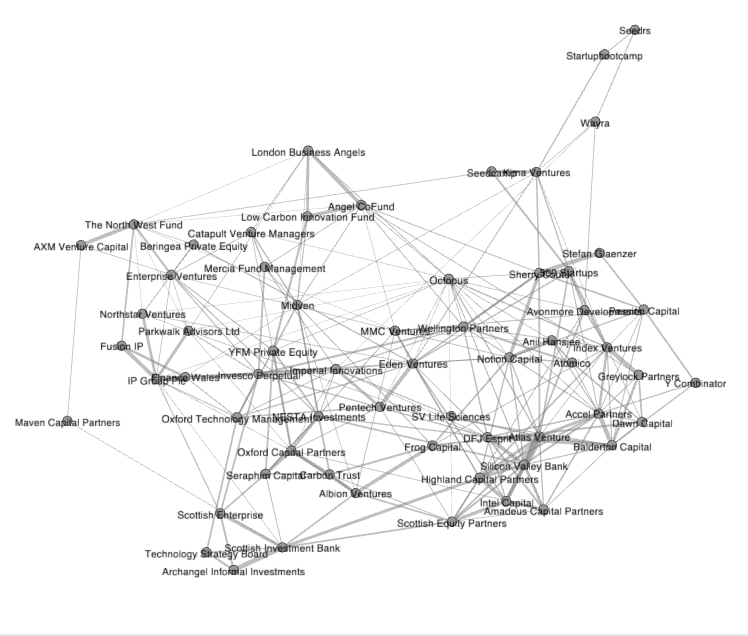 (This image maps every Seed, Series A and Series B investment that closed in London in 2010–2014. The map visualises over 30 funds, and each line from one fund to the next indicates an investment in the same company. )

There are many examples of companies who have benefitted from this co-operation. Qubit raised their Series A with Balderton and Series B with Accel partners, CityMapper raised their seed with Index Ventures and Series A with Balderton. Google Ventures first investment in Europe was in Kobalt, a company also backed by Balderton despite the funds being similar sizes. Such relationships are the norm rather than exceptions.

Generally this is good thing for entrepreneurs, and they should be encouraged by both the growing number of funds focussed on early-stage technologies, and the fact that investors are able to work together to help build their companies.

This is also one of the many reasons that the rise in new seed and growth funds in Europe is exciting for the rest of the ecosystem. While it is true that new investors such Google Ventures, Mosaic Ventures and Whitestar Capital will mean we end up sharing more deals, this mostly benefits existing players.

Investing in growing tech companies is a long term bet on growing productivity. It isn’t like day-trading where one party needs to loose for another to win. Instead, as long as these companies can continue to generate value and have a catalysing affect on the growth of the broader economy, more capital is better for everyone ( until we pass the point above ).

Enter your email
Subscribe
This month marks my tenth year at Balderton, and my 12th year investing in and supporting UK & European technology companies. I've been fortunate to have met and worked with Europe's best technology entrepreneurs, and their teams, in an exceptionally broad range of industries. I've worked with businesses as they have
The round was led by Summa Equity, with existing investors including Balderton, Eight Roads and Schibsted Ventures. Tibber [https://tibber.com/en] is a smart energy provider that is revolutionising the energy industry with its innovative business model. As I have written about before [https://www.jameswise.com/untitled-9/], instead
We're delighted to congratulate the team at Sketchfab [https://sketchfab.com/], who today announce their acquisition by Epic Games. Balderton first invested in Sketchfab in late 2013, leading the companies seed round and I joined the board as part of that round. Today, Sketchfab is the leading global platform for